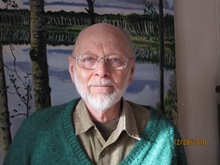 Ewen was one of the first organic researchers in Canada. In 1990, during his tenure at the Saskatchewan Research Council, he led a team that examined a number of organic farms. Their study, “Viability of Organic Farm Practices”, included on-farm analysis of economic factors, yields, and rotations. They were the first to determine that phosphorus levels were low on organic farms, that wheat yields were similar for organic and conventional farms, and that net returns could be higher for organic wheat.  Ewen remained a supporter and a resource for organic agriculture.  He was a deep thinker, a magnet for information, and he shared freely and passionately with those around him.